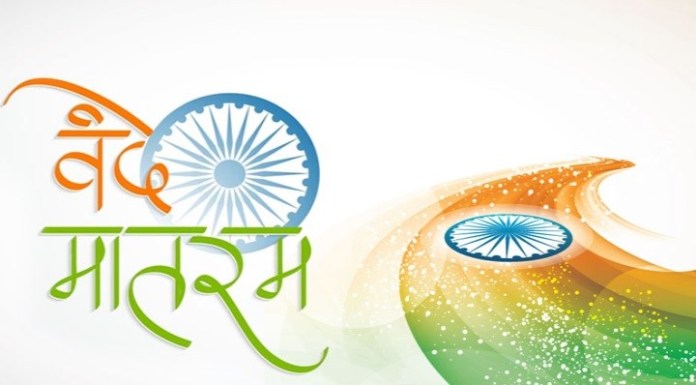 The root of the Sanskrit word Vande is Vand, which appears in Rigveda which means “to praise, celebrate, laud, salute respectfully” and the word “Mataram” has Indo-European roots in Matar- (Sanskrit),  méter (Greek),  mâter (Latin)  which mean “mother”. “Vande Mataram”, originally pronounced as ‘Bande Mataram’ is a poem written in 1875 by Bankim Chandra Chatterjee that found a place in his novel “Anandamath” in 1882 with additional stanzas, means “I praise thee, Mother” or “I praise to thee, Mother”.

So what’s wrong with it that Muslims find it anti-Islam? In literary meaning it’s just two words praising our mother or motherland. Or is this “Anti Vande Mataram” drive just an act by Muslims towards the sentiment with which Anandamath was written or the Pro-Hindu sentiment depicted in the novel Anandamath where while praising “Santans” who used to live in a dense forest somewhere in Bengal and emerge time to time to make war against British and Muslims, Muslims were shown in low lights – and on top of that, when these santans were not only the children of Motherland but Goddess Kali ? Most possibly yes. Another school of thought is, a Muslim by uttering “Vande Mataram” is actually committing “Shirq” – sin of worshipping anyone or anything in addition to Allah. That may be the reason a Muslim never does “Namashkar” as it’s believed to be bowing to someone other than Allah and thus committing Shirq which is the biggest unpardonable crime in the religion of Islam. As long as the latter is the only reason, we Indians should not have a problem.

However most of the protest that started around 1890s was not for what Islam as a Religion has to say nor for what’s written in Quran nor for the fear of Shirq. In 1908 Sir Syed Ali Imam of All India Muslim League expressed his objection in the All India Muslim League Session stating “I cannot say what you think, but when I find the most advanced province of India put forward the sectarian cry of Bande Mataram as the national cry, the sectarian Rakhi Bandhan as a national observance, my heart is filled with despair and disappointment; and the suspicion that, under the cloak of nationalism, Hindu nationalism is preached in India becomes a conviction”. He was referring to Rakhi Bandhan celebration of 1905 summoned by Rabindranath Tagore towards establishing brotherhood between the two communities of Hindu and Muslim against the Division of Bengal by Lord Curzon. And surprisingly the decision of dividing Bengal was taken in Assam in June 1905, where the Muslims were convinced of the idea of a separate state to keep their identity. The plan was to divide the Hindu majority regions of West Bengal, Bihar and Odisha from Muslim-dominated areas of Assam and Sylhet for the selfish agenda of British and Muslims fell prey to that idea but to justify the same, some like Syed Ali Imam pushed the blame to “Vande Mataram” and termed “Rakhi Bandhan” as Hindu nationalism.

While the protest to “Vande Mataram” was on and off and didn’t take a shape of national importance, it was fueled by Congress in 1937 by censoring and limiting “Vande Mataram” to first two stanzas thereby officially accepting the other three stanzas as anti-Muslim. Vande Mataram was a source of inspiration to the people in their struggle for freedom and irrespective of cast creed religion, it was chanted by all without any hesitation and not many ever found it anti-Muslim till 1937 when the Congress Working Committee said, “The Committee recognizes the validity of the objection raised by Muslim friends to certain parts of the song.” And declared that “only the first two stanzas should be sung” as National Song since these do not have any religious connotations.

After a pause of almost 25 years this issue cropped up again when in a municipal school in Bombay in 1973, objections were raised on singing Vande Mataram followed by an article by historian A.G Noorani that reminded our Muslim friends of the bygone era not fully relevant as was propagated by the communal forces of Muslim League.

According to historian Sabyasachi Bhattacharya, When Bankim first wrote it in early 1870, it was a beautiful hymn to motherland, richly watered, richly fruited, dark with crops of the harvest, sweet of laughter, sweet of speech, giver of bliss. But in 1981, before Anadamath, this beautiful hymn was expanded with four more stanzas that as per him was symbolism of religious sentiments.

These four stanzas, in spite of carrying Hindu religious sentiments, does not provoke anything anti-Islam. And thus Anandamath nor Vande Mataram was anti-Islam since the additional stanzas were added in the context of narrative demanded to describe that era.  If someone goes back to 1770s, the period described in Anandamath, he can observe that the plot revolves around the Fakir-Sanyasi rebellion against the Muslim Nawab who under the influence of the East India Company used to extract revenue from the villagers. Bengal was in the midst of a severe agrarian crisis and large segment of population was starving. The Hindu sanyasis and Muslim fakirs led the uprising. The rebellion was put to an end by British troops, the Nawab was deposed and the East India Company took direct control over administration and revenue collection. And thus, Vande Mataram Cry or Anandamath was never Anti-Islam but a protest against then Muslim ruler who for his own benefit was acting against the interest of common men and the British.

The controversy didn’t stop there but continued when the necessity of National Anthem came into the picture. Vande Mataram being older and extensively used in freedom struggle naturally came as a choice but the later part of the song created doubts in the minds of Congress. So a committee was formed comprising Tagore, Nehru, Subhash Bose to review. Subhash Chandra Bose feared that if the committee discards the song, it would be against the wishes of Hindus in Bengal, as expressed in a letter to Tagore in 1937. Jawaharlal Nehru who read an English translation of Anandamath, wrote in a letter to Tagore in 1937 that the background of the novel is ‘bound to irritate Muslims’. The correspondence between the sub-committee and Tagore shows how everyone looked up to him for a solution. More so, because it was Tagore who gave tune to the song and first sung it in a Congress Session. Tagore’s reply to Nehru shows that he saw the inclusion of the poem in the novel ‘accidental’ and that the first part had attained its ‘individuality’ for the tenderness and devotion expressed towards the motherland. But he thought that the whole song would hurt Muslim sentiments. Also, it will not be improper if someone says Tagore was little biased since his “Jana Gana Mana” was also under consideration and naturally as a human being, he might have thought his song becomes the national anthem.  In a letter to Subash Chandra Bose, Tagore’s views was even more evident. He wrote“The core of Vande Mataram is a hymn to goddess Durga: this is so plain that there can be no debate about it. Of course Bankim does show Durga to be inseparably united with Bengal in the end, but no Mussalman can be expected patriotically to worship the ten-handed deity as Swadesh (the nation).” Mahatma Gandhi also viewed the song from a practical point of view. While expressing deep reverence to the song and its connection to the freedom struggle, he maintained that it should not be the reason for communal enmity. He reached out to the Muslims to appreciate its historic importance while also cautioning against any imposition – his appeal was for mutual respect. Finally, President Rajendra Prasad in 1950 said in the Constituent Assembly that Vande Mataram shall be honored equally and have an equal status with Jana Gana Mana.

Till today, the drama continues and now a days Muslim not uttering “Vande Mataram” is being viewed by few as anti national which to me is not right considering the long history and sentiments of this song associated with Muslims apart from the religious “Shirq”. Now a days BJP being in power and fear of Hinduism taking over the national arena, it has become much more disturbing for Muslims and the same was also provoked once by Nathuram Godse in one of his speech where he told “It is notorious that some Muslims disliked the celebrated song of Vande Mataram and that Mahatma forthwith stopped its singing or recital where he could. It continued to be sung at all congress and other national gathering but as soon as one Muslim objected to it, Gandhiji utterly disregarded the national sentiment behind it and persuaded the congress also not to insist upon the singing as the national song. We are now asked to adopt Rabindranath Tagore’s Jana Gana Mana as a substitute of Vande Mataram. Could anything be more demoralizing or pitiful?”

As per me, there is also a silent reason for provoking Muslims who don’t utter Vande Mataram and promoting Vande Mataram in all Platform since many anti congress are still unhappy with the decision and that too when it was instigated by Nehru and Gandhi. However all said and done, to me, not chanting Vande Mataram doesn’t mean he is not an Indian or a patriot or should be looked as an anti-national when a history of 150 years is associated with this song over and above the religious beliefs.

Disclaimer: The article is just an effort to share various discussions across sources like  Frontline, Oxford Academics, Economic and Political Weekly and discussion with a few friends on a single platform and not to hurt anyone’s religious beliefs or national sentiments