The best thing about any mountain is its nature of acting as a leveler. It gives a vision to un-see the differences of heights, status, positions, designations, gender etc since from a great height, such mere differences are just not

visible. On the contrary mountain gives a vision to see some other important factors like respect, equality, brotherhood, bonding and above all togetherness that can unite all and do away with those so called differences. If asking whether anyone inside the toilet is gross in our daily life, it’s normal in the mountain, if talking about my inability or difficulty in doing something is a matter of shame in our daily life, expressing the same and asking for support is encouraged in the mountains, if boasting about not taking this and that food is called superiority in some occasions, mountain makes all jump over whatever food available and relish that to the core, and such examples are many. In simple words, mountain makes us what we truly are, what we truly meant to be, what we truly love to be and not what we unsuccessfully pretend to be.

And we are approaching towards reliving such moments once again. We are just a few hours away from starting one more such journey to mingle with the mountains – a journey we wait with all our heart and soul throughout the 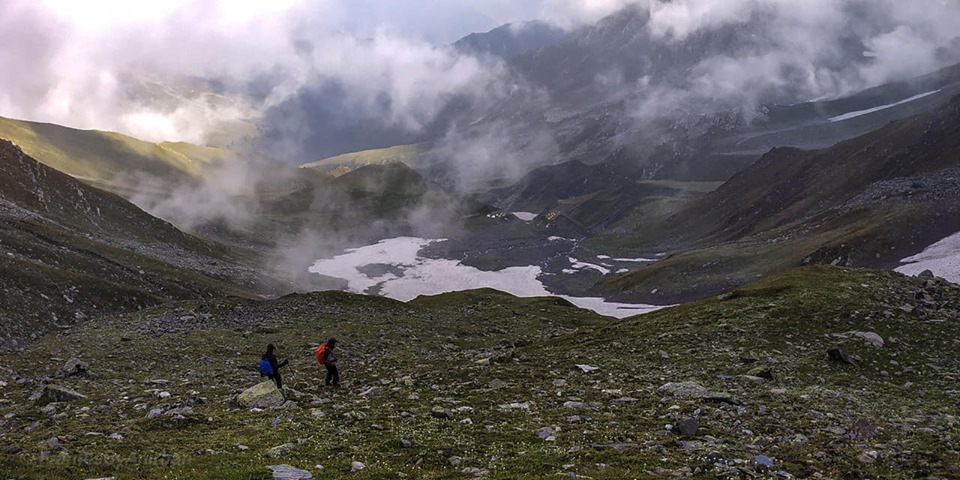 year; a journey where pain becomes pleasure, togetherness becomes closeness, experience becomes wisdom and overall we empty our egos once again to learn some more, enjoy on our small victories, stare at our inability and helplessness in front of the wrath of mother nature and finally return with a new “myself”. Mountain for us is the best teacher that teaches us to 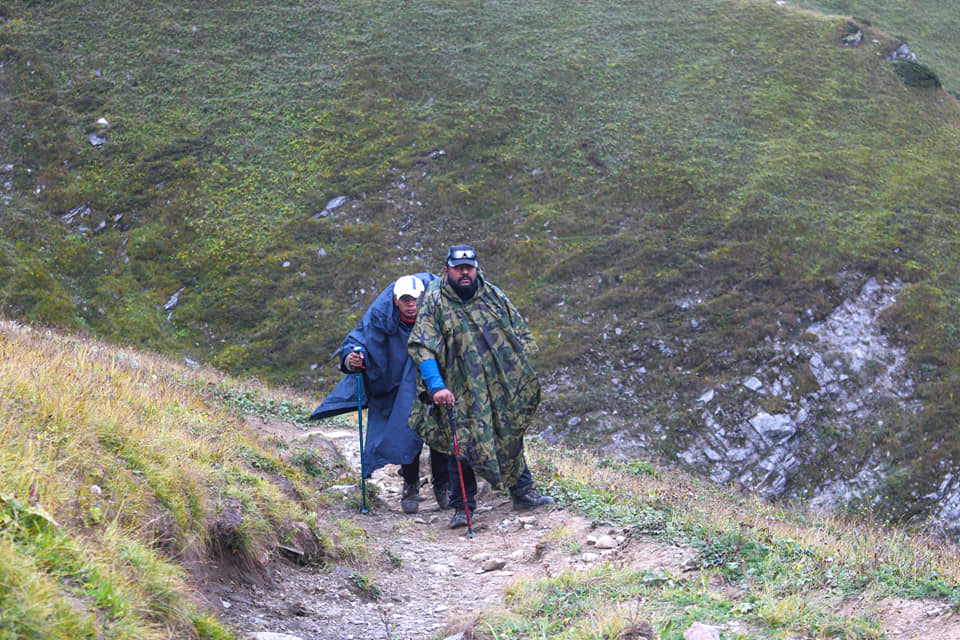 be humble, to accept the very truth of how tiny we are when compared to its vastness. It’s never human who defeat the mountain as some say; on the contrary it’s the mountain that allow us to summit so that we spread the stories of its majestic beauty, endlessvista, life of people on the valleys, beauty of snowfall seen from the small opening of our tents, snowclad peaks ornamented with first golden rays of the sun, uncanny beauty of the night with stars witnessing the creation of God, sound of silence being carried by winds and whispering in the ears the tales of the woods, the cacophony of birds returning home after a busy day, and let others know, feel and cherish these beauties since mountains also feel lonely in absence of its visitors, admirers and spokespersons.

This year we decided to explore a different terrain away from Uttaranchal we went last few times and thus Himachal came into picture. Our friend Anirban Chakladar as usual took the lead and finalized Kaliheni Pass with 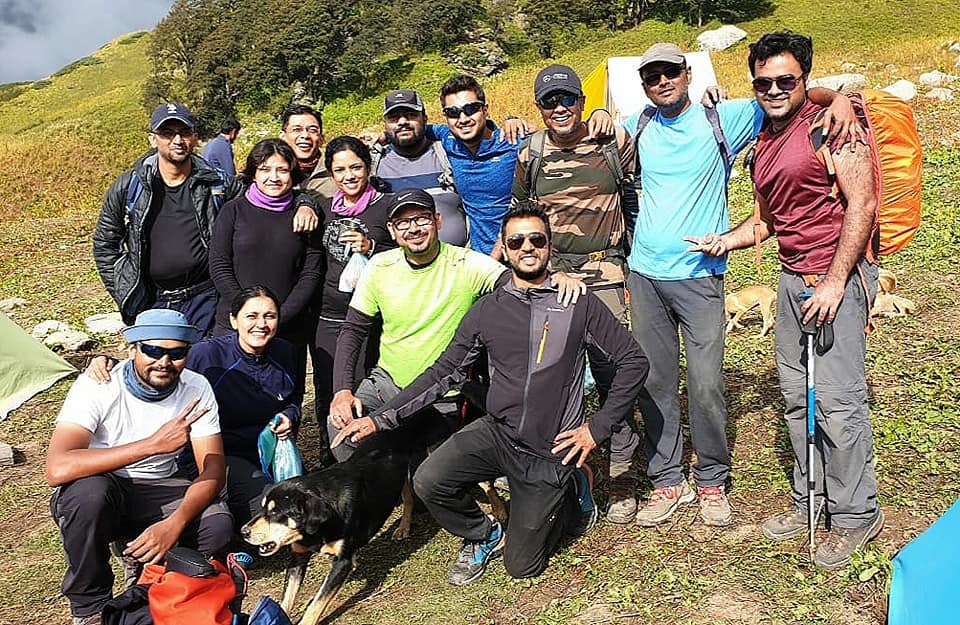 Himalayan Trekkers (HT). The word Kaliheni derives from two words – Kali means Black and Heni means Snow/glacier and as rightly named, one can observe ancient glaciers with old ice formations starting from the advanced base camp. The Pass is at an altitude of 4800 mts and one of the least travelled destination by the trekkers community. Joining Kulu valley with Banghal Valley, this trek starting from Manali gradually takes one through the treasures of Himachal starting from Hadimba temple with camps in between at Lamadugh (Night-1), Riyali Thatch (Night-2), Kaliheni Base Camp (Night-3,4), Riyali Thatch (Night-5), Miyali (Night-6) and coming down to Sangchur on day-7 and then taking a vehicle to Manali on the same day. However during our return, out of thirteen members, nine of us skipped Miyali and on Day-6 itself, came down directly from Riyali Thatch and then to Manali via Sangchur covering a distance of 12-14 km in 8 hrs. Uttaranchal where tree line starts soon after 10-11k ft. From the very starting of our trek, rapid altitude gain started. On day 1, we gained an altitude of 1000 mtrs (From Hadimba temple to Lamadugh, 12 km, 7/8 hrs), Day 2 we gained 1000 mtrs and then came down by 500 mtrs (Lamadugh to Riyali Thatch, 14 km, 7/8 hrs), Day 3 we gained 600 mtrs (Riyali Thatch to Kaliheni Base Camp, 10 km, 6/7 hrs), Day 4 we gained 800 meters from Base Camp to Kaliheni Pass and then came back to Kaliheni Base (14 km, 8 hrs). This quick altitude gain with little time to acclimatize and long walks (75 km in 6 days) with long trek of over 6-7 is what made this trek little tiresome and hence I mentioned in the beginning that this trek cannot be taken lightly. There are some other challenges that make this trek above moderate on the summit day. The first challenge is crossing the glacier immediately after starting from the base camp. The glacier that was looking so attractive and 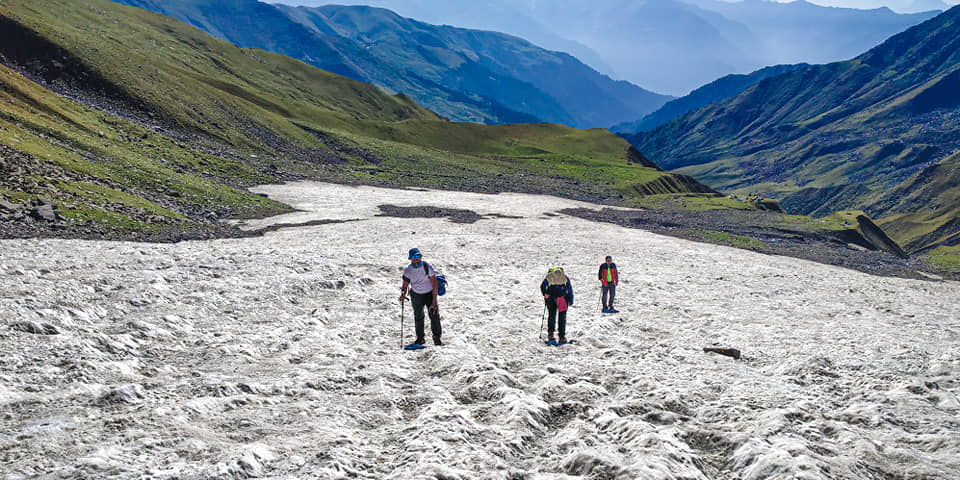 calling us with open arms becomes an endless journey. Only a kilometer or so becomes a challenge to finish and immediately after that comes the seventy degree inclination. Being already at 14000 ft altitude where exhaustion is natural and that too after crossing the glacier, scaling this block stands as a challenge and then comes the second and then the third, each posing itself with newer challenges like boulders, rocks, loose pebbles and all of us had to keep a safe distance so as to avoid any loose rock falling and hitting the person behind. However with hope in our eyes to experience what we saw in pictures and guided by Inder and Ameet, the two trek leaders, we the team of thirteen (Anirban Chakladar, Rajashiri, Bhakti, Subhayu, Abhirupa, Saikat, Aranya, Rajat, Naren, Jasojeet, Imran, 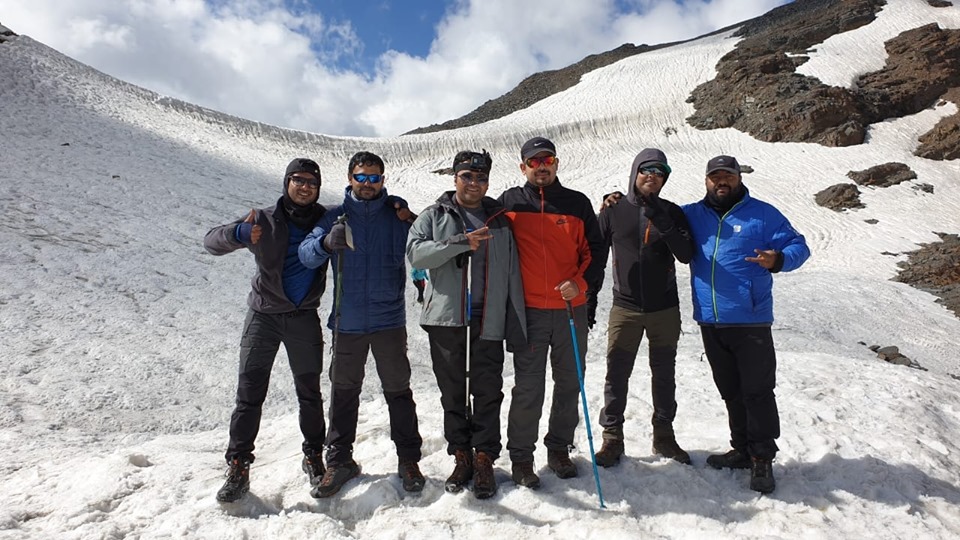 Praveen and myself) moved. Finally we were almost near the pass when the last challenge came – a straight seventy degree wall with large boulders. Honestly I lost all energy by that time and a call was coming from inside to let it go. And immediately another call was coming “you are so near”. Fighting the battle within, started scaling the wall and after 15-20 minutes, we all were on the top with Kaliheni Pass presenting itself with its majestic beauty in front of us. While ten of us went further up to see the view from the top of the pass, we three (Anirban, myself and Rajat) statyed back and enjoyed the glory all around. Gradually cloud started engulfing the peaks and we feared to see a similar situation as in Lamadugh where 4-5 hrs of rain on day one itself almost made us rethink fearing landslide etc. Just due to assurance from guides and Sapta of Himalaya Trekkers, we regained our courage to continue and thus seeing this day finally.

Descent is always a tougher job and that too now its already 2 pm. We took more time that estimated to reach

the summit and also spent some more time here. However there was no worry in the face of our guides which gave us confidence. Also in spite of Bhakti, Naren, Subhayu and Aranya decided to go to the top at a later stage, both Inder and Ameet encouraged which was so nice. These people like Ameet, Inder, and many others we met on other treks like Geelani, Sandeep, Dinesh, Gulab Singh are always so cheerful, so energetic that we just can’t ignore their charisma. They belong to the mountains, enjoy being there and make others enjoy the nature through their stories, actions, sensitive approach towards keeping the nature clean and overall a sense of belongingness which is so contagious that we always remember them, talk about them and look forward trekking with them once again.

The night at Kaliheni Base Camp called for celebration with sky glittering with thousand stars, milkyway gradually 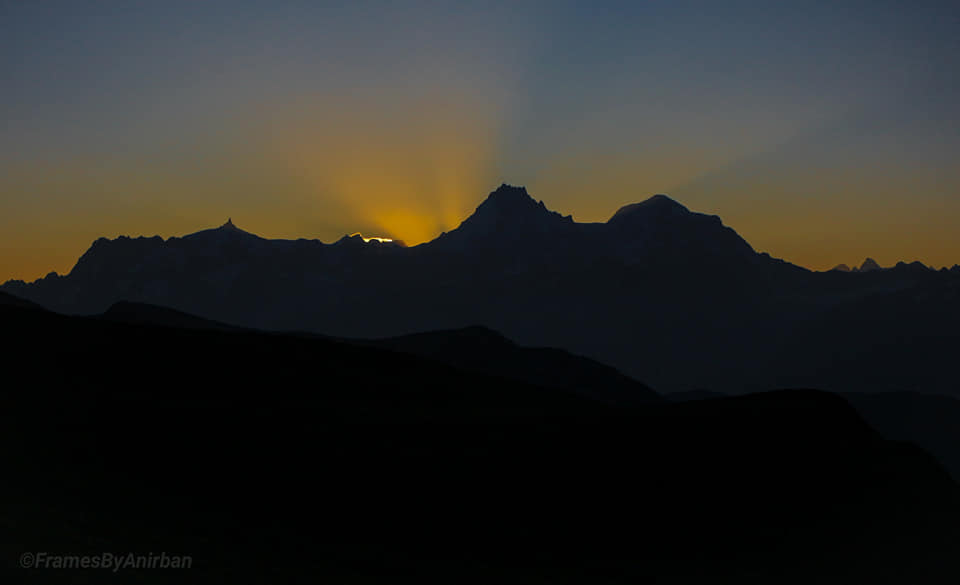 becoming prominent and clicking sound of cameras/mobiles capturing the drama portrayed by mother nature. Kaliheni Base Camp is an excellent camp location with one side having the glacier I mentioned through which we went to the Pass and on the other side the entire Pir Panjal range with three peaks prominently visible – Indrakilla, Indrasan and Deo Tibba. Gradually the tiredness of the day took a toll on our eyes and we got into the tents. Next day we came down to Riyali Thatch camp and enjoyed with Cricket with a tree branch, Camp Fire, competition of spending three minutes in ice cold water, songs, recitation etc. Next day, we nine started early at 9 am from Riyali Thatch as our destination was straight to Manali bypassing Miyali camp while four stayed back (Bhakti, Rajashiri, Imran, Jasojeet) who will later start for Miyali. At around 1 pm we reached Miyali and then to Sangchur at 5 pm through a real difficult trail with bushes, jungles, rain, rocky terrain and finally hit the soft spring mattress in Hotel Snow View at around 6 pm. 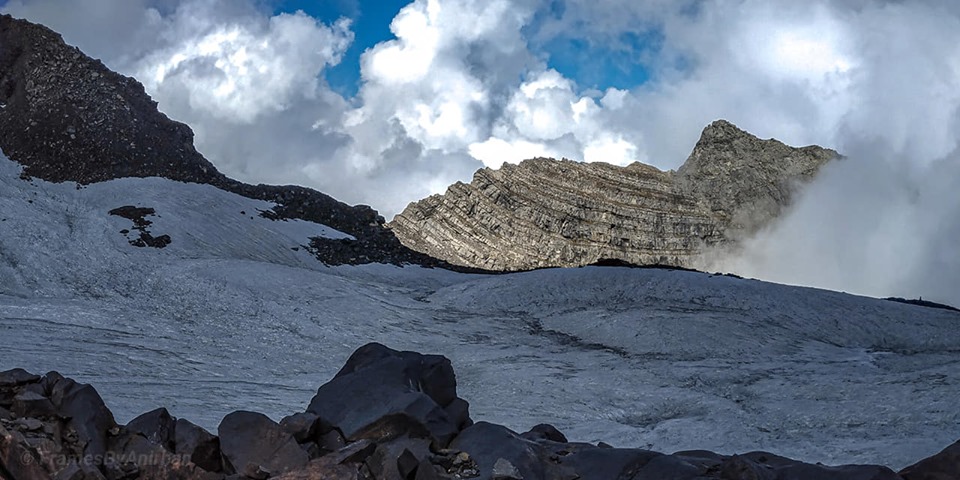 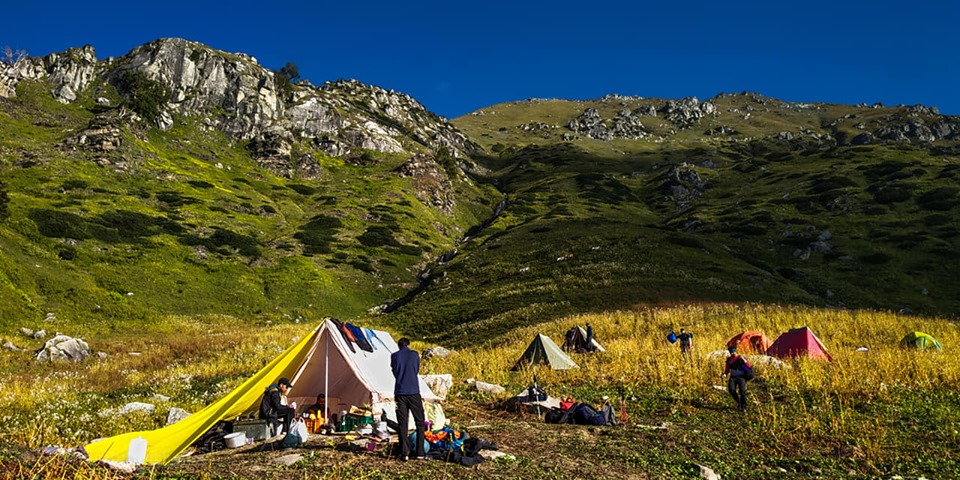 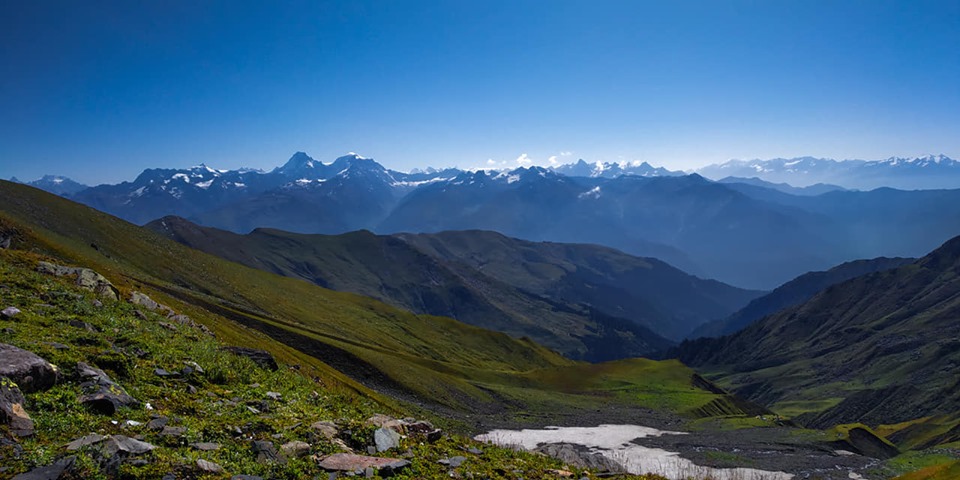 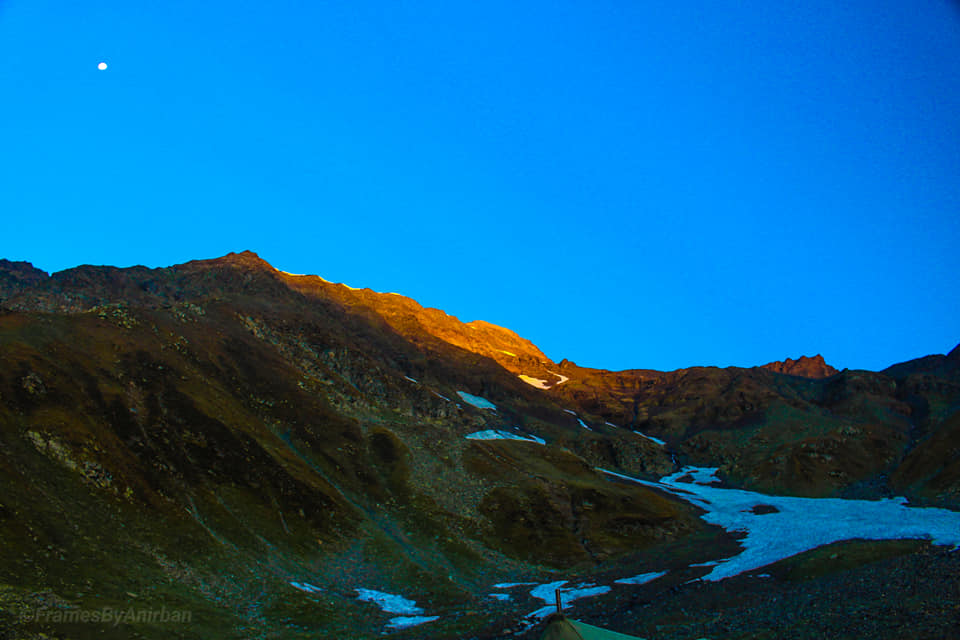